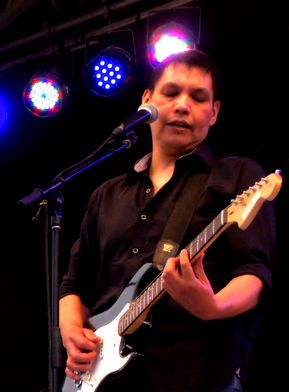 We've all heard the phrase "born to be". In Conrad Bigknife's case, he is living that phrase. A vocalist first and foremost, he has the ability to capture a song and hand deliver it to the audience. He can sound like some of the world’s most widely recognized artists, he’ll sing you one of his ballads and you’ll feel it to the core.

Quickly becoming recognized as one of Canada's top up and coming Aboriginal artists, Conrad works hard at blending the lines of alternative country music and his cultural background. Like many performers before him who successfully broke down some fences, he might be a challenge to the concept of what a country artist is. It's a challenge he relishes and celebrates; because music does nothing better than bring people together with a universal language. His passion, drive and talent are undeniable. A showman and an artist, a writer and a voice. It’s real life music, hooks included.

Bigknife grew up in a large, close-knit family on Starblanket First Nation with 3 sisters and 4 brothers. He remembers his father as the ultimate “Jack-of-All-Trades” driving snow plow in the winter, doing carpentry year round and raising cattle on their farm. His Mom somehow managed to take care of all of the kids and also drive school bus.

At the age of 8, Bigknife remembers listening to classic country albums with his Dad and siblings. Some of his favorite performers were: Merle Haggard, Conway Twitty, Freddy Fender and of course, Johnny Cash. By the age of 13, he was a full on Elvis fan. He says, “There were times when I got very close to sounding like Elvis on “Jailhouse Rock” and “Hound Dog” and right then I knew that music was what I was going to do with my life.” Bigknife will still play some of those beloved Elvis songs for the fans who request them when he plays at the local Province casinos.

Bigknife’s big heart and endless determination remind us of another star who was able to transcend musical boundaries and who stood proudly on the stage right up to the end — Roy Orbison. Bigknife has that clear, powerful Orbison-esque voice and it’s easy to imagine that through the years Bigknife’s songs will evolve and become classics just like Presley’s and Orbison’s did.

We were fortunate to have Conrad Bigknife and his band play at the recent AFOA National Conference in Saskatoon. This group put on a dynamic show and got the delegates up and dancing with a collection of country, blues, and rock hits. We look forward to having them on board at our next event in Saskatchewan!!!
George Rogerson, The Chelsea Group